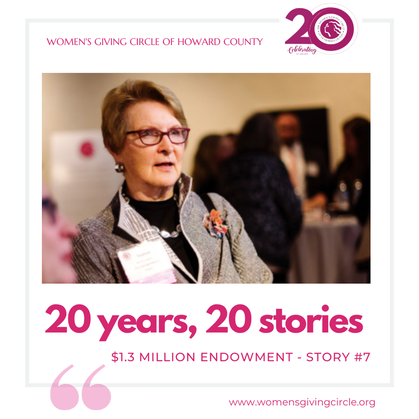 Let’s start with the basics: what is an endowment?

Simply stated, it’s a way for philanthropic organizations such as the Women’s Giving Circle to invest in the future.

Our Founders recognized that collective, amplified giving was one essential component of the WGC.

Another essential component was creating an intentional way to ensure funding in perpetuity, and it was then that our endowment was born.
So What?

The WGC is one of a handful of giving circles in the country to have an endowment. As a fund of the Community Foundation of Howard County (CFHoCo), we benefit from their investment management services.

Over the years we’ve invested a percentage of our funds raised to create a perpetual, sustainable source of funding that will benefit women and girls in Howard County far into the future.

Why did the founders choose to do this from the beginning?
​
Now What?

No matter how you choose to give to the WGC, you are making a difference. As a Community Member, Sponsor Member, Legacy Member, or Big Give Member, your dollars go towards programs specific to women and girls, programs that are traditionally vastly underfunded when compared to other pressing social issues.

When WGC founder Jean Moon was asked why she was invested in growing the endowment, she said:


For 20 years, the WGC has dedicated itself to leveraging our collective dollars, to amplifying the power of collective giving, to building a community of philanthropists and creating a permanent legacy to address the needs of women and girls in Howard County.

Will you join us? www.womensgivingcircle.org

Be a part of our story.