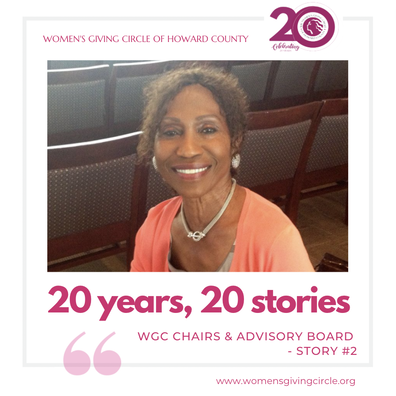 What?
​
What makes those who serve on the Women’s Giving Circle of Howard County’s Advisory Board so exceptional? Central to the Giving Circle model is donor empowerment: engaging and encouraging donors (as represented by the Advisory Board) to choose how to allocate funds. And who leads this process?

The WGC Advisory Board Chairs & Members.

Their WGC Advisory Board Chair’s primary role is to maintain a keen focus on fulfilling the mission of the WGC: building a community of philanthropists and creating a permanent legacy to address the needs of women and girls in Howard County. They facilitate board meetings, exemplify strong leadership, and practice effective governance.


And the WGC Advisory Board is very much a working board, with Advisory Board Members supporting the Chair by turning ideas into actions and putting change into motion.

Over the last 20 years, the WGC Advisory Board has welcomed a diverse group of women from all sectors of our community who work together to promote philanthropy in order to support programs focused on women and girls. We are so proud that through the years, the women who have served on the WGC Advisory Board have not only given time and talent, but also financial support to further the WGC’s mission.

And we salute the 95 women who have served on the WGC Advisory Board.


Each and every one of these remarkable leaders have brought something unique to their role, shepherding the WGC through times of growth and challenge and change to emerge ever stronger. An emphasis on a culture of collaboration, bringing together an array of perspectives and knowledge and skills and talents, allowed these women to build the WGC from a simple start-up to a powerful organization now celebrating its 20th Anniversary!

Consider the many initiatives championed by the WGC throughout the years: the Emergency Response Network, nonprofit partner grants, the Circle Team, Journey, the Young Women’s Giving Circle, JA Rising Women (our first multi-year grant), our Diversity, Equity and Inclusion focus, Our Giving, Our Stories, and so many others. Each began with a seed of an idea that was nurtured, grew, and bloomed through the vision, commitment, enthusiasm, and actions of a WGC Advisory Board Chair and the support of Advisory Board members.

We are immensely grateful for the WGC Advisory Board Chairs and leaders who paved the way, year by year, from our founding and through to today. Each of them led in such a way as to ensure a strong future for the WGC, and while it is extraordinary to see how far we’ve come as an organization in just 20 years, it’s equally exciting to consider how far we can go, together.

As to what happens now? Perhaps you are inspired to donate for the very first time.

Or maybe you’re already a member of the WGC and choose to become more involved, seeking an opportunity to join one of our committees, and/or eventually our Advisory Board.
​
The truth of the matter is this: leadership doesn’t happen in a vacuum.

Each and every Advisory Board Chair succeeded thanks to the support of the Advisory Board and the efforts of every single person involved in the WGC.

For 20 years, the WGC has dedicated itself to leveraging our collective dollars, to amplifying the power of collective giving, to building a community of philanthropists and creating a permanent legacy to address the needs of women and girls in Howard County.

Will you join us? www.womensgivingcircle.org

​Be a part of our story.